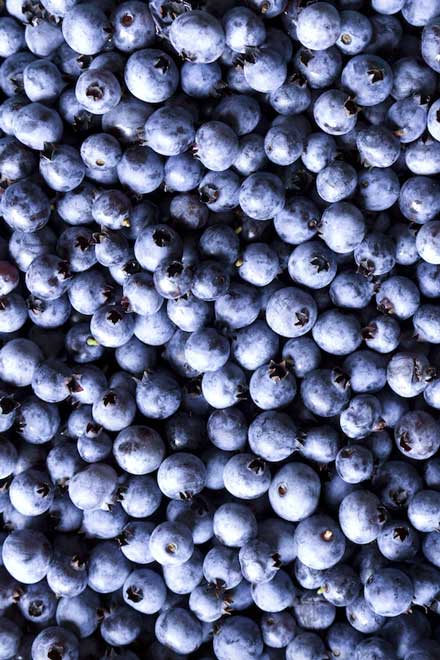 It’s easy to get swept up in the belief that the ultimate healing food is hiding somewhere in the tropical wilds. We read about researchers who scour the jungle for miracle roots and berries, and we see exotic dried fruits for sale at the grocery store with packages proclaiming them “superfoods.” Maybe one day, we tell ourselves, a true miracle food will be discovered out there in the rain forest—the root or berry or herb or nut that will save humanity. While of course the rain forest has potent medicine to offer, that’s not where scientists will find the most valuable food that can save us. The world’s most powerful food is hiding on low, scrubby bushes in plain sight. I’m talking about the wild blueberry. There is not a cancer that wild blueberries cannot prevent, nor a disease known to humankind that wild blueberries do not protect you from. Do not confuse wild blueberries with their larger, cultivated cousins, which, while great for your health, don’t offer even a fraction of wild blueberries’ power.

The difference between cultivated and wild blueberries is the difference between farm raised salmon and wild salmon, or between industrial, grain-fed beef and freerange, grass-fed beef. Bringing cultivated blueberries into your life is like drinking from a paper cup; bringing wild blueberries into your life is like drinking from the golden cup that Jesus once drank from—the Holy Grail. Wild blueberries hold ancient and sacred survival information from the heavens, going back tens of thousands of years. They have adapted to every fluctuation in climate over the millennia. Their innate intelligence has prevented them from accepting a monoculture; instead, they thrive with more than 100 variable strains that look similar yet have different genetic makeups, so that these plants can never be eradicated, no matter what comes in the future.

While other food plants can only continue after a fire if their seeds survive and are replanted, wild blueberry plants can be burned to the ground, and they will come back stronger than ever. No other food on the planet has the ability to thrive in such trying conditions. It is the number-one adaptogen, period—even though it is not recognized as an adaptogenic food at all. Currently, wild blueberries are acknowledged by nutrition experts for their sky-high levels of antioxidants. It goes beyond that—they have the highest proportion of antioxidants of any food on the planet. On top of that, these tiny jewels have a plethora of undiscovered qualities. For one, they’re armed with dozens of antioxidant varieties that science does not yet know about, along with polyphenols, anthocyanins, anthocyanidins, dimethyl resveratrol, and as yet unknown cofactor adaptogenic amino acids. When you eat these berries, their innate intelligence reads your body, searches out potential disease, monitors your stress and toxicity levels, and figures out the best way to heal you—it is the only food that does that.

One of the most effective heavy metal detoxing foods, wild blueberries are fantastic at removing all other Unforgiving Four factors, too. Wild blueberries are also the most powerful brain food in existence, the most potent prebiotic there is, and a star at restoring the liver. Essentially, this fruit offers a benefit unobtainable from any other source for every part of the body. There is more information in one wild blueberry plant than there is on the entire Internet. If researchers had the technology to decipher what’s inside wild blueberries and how to use it all, they would develop cures for every condition. One hundred years from now, medical science will use the wild blueberry as the key to unlock the secrets of how to heal disease. This is the food you want in your life when you’ve been through the unthinkable and need the support to rise up again. It’s also for anyone who needs a physical boost or strives athletically—wild blueberries in the system could mean the difference between life or death for a rock climber in a perilous situation. Wild blueberries are the sole food on the planet to contain the full power of the divine, the Holy Source, the universe, and they are revered by the angels as the key to keeping the human race alive in the coming times. Wild blueberries are, above all, the resurrection food.

If you have any condition, particularly if it’s cancerous or related to the brain and/or nerves, try bringing wild blueberries into your life.

If you have any symptom, whether emotional, spiritual, or physical, try bringing wild blueberries into your life.

Wild blueberries have more inspiration to offer us than even the best motivational speakers on the planet, because they mend us on an emotional level. Wild blueberries strengthen the very fabric of who we are so that we won’t be so susceptible to punishment, rejection, scorn, humiliation, devastation, and degradation. If you’ve struggled with feeling criticized, depreciated, discredited, mistreated, or neglected, this is a holy, healing food for you.

I’m sure you’ve had an experience in life that leveled you. Something, whether an illness, troubled relationship, or tragic event, that brought you to your knees and practically annihilated your sense of self. Wild blueberries understand what you’ve been through. They know who you are, the damages you’ve dealt with, and how to help you rise again. Native Americans observed early on that when wildfire occurred, the only thing that would grow in its path afterward were wild blueberry plants—in fact, they would come back stronger and healthier than ever before. This is the source of the wild blueberry’s power: not only can it rise from the ashes, it uses those ashes to its benefit. And when frozen, because they are true adaptogens, wild blueberries don’t lose their nutritional value as some fruits and vegetables do; their nutrition increases. The challenge of withstanding the freezing process pushes the fruit to perform at the top of its game, providing you with greater nutritional force and bioavailability.

On both ends of the spectrum, in fire and ice, wild blueberries don’t just survive; they triumph. They take an adverse circumstance, meet it, and become better for it. When you eat this supernatural fruit, that indestructible essence becomes a part of you. Lastly: We all hear a lot of talk about having the right mind-set to attract abundance, shaping our thoughts and actions to manifest the lives we want. This can be very helpful. A person who feels positive is more likely to make choices that lead her or him to more positivity. Sometimes, though, the subject tears us down. The last thing someone who’s sick, suffering, or in otherwise unfortunate circumstances needs is to feel like they somehow created, attracted, or brought it upon themselves. If you want to know one of the secrets to manifesting abundance, it’s the wild blueberry. I know, that’s not what you’d expect! And yet it’s true. These little berries are that powerful. When you are striving for anything, when you want to live a life of bounty and blessings, turn to wild blueberries and watch the magic happen.

Often the easiest place to find wild blueberries is in the frozen-food aisle at the local supermarket, in the cases that carry smoothie ingredients. As I said above, freezing makes the berries even healthier. To enjoy them, either whip them up into a frozen treat, or thaw and enjoy. Frozen wild blueberries blended with frozen bananas make a delicious and wholesome-beyond-belief ice cream.

* If you know someone who’s challenged by an illness, offer her or him wild blueberries to show your goodwill.

* When you eat wild blueberries, make a mindful note that they’ve been graced by God and the universe, that they are a gift from above.