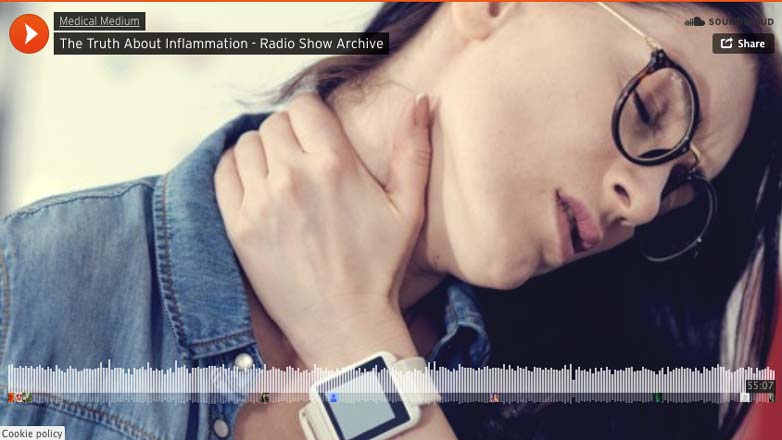 Inflammation is a term you’ve probably heard a lot. “You’re inflamed,” a practitioner might say when you share you have joint pain, a rash, or strange pains. Or, “There’s inflammation in there,” a doctor may remark after reviewing MRI results. But inflammation is really a “lazy term” because inflammation only results from a deeper problem. Inflammation isn’t an answer—it’s an indicator that something else is going on in the body.

The Two Reasons for Inflammation

Inflammation never develops on its own, and it only emerges for two reasons. In the human body—where hundreds of millions of undiscovered chemical functions and chemical reactions are taking place per cubic inch—it might be surprising to learn that there are only two reasons behind inflammation. Medical communities are completely unaware of this fact.

Have you ever sustained a sports- or exercise-related injury? In this instance, inflammation related to that injury likely emerged. This type of inflammation can also result from things like having dental work done, accidentally cutting yourself, slipping on ice, a sprained ankle, or a burn.

There are hundreds of invaders that can stir up inflammation issues, including rashes, body aches, pains, and much more. How someone recovers from a knee replacement surgery is one example of how pathogens can create inflammation and impact the body’s ability to heal. Someone may have knee replacement surgery, recover quickly, and find him or herself walking soon after without issue. In this instance, the person likely didn’t have invaders triggering inflammation issues around the area where the surgery took place. However, if you have knee replacement surgery and the knee doesn’t seem to be calming down or healing properly, it’s likely an invader creating issues. This invader and the chronic inflammation it can provoke may have even been part of the reason the knee joint wore out initially. When it comes to knee and hip replacements, a slow, extended recovery is often partly related to the Epstein-Barr virus.

At present, some medical professionals blame inflammation on the body attacking itself, but this is a disastrously inaccurate theory and claim. As I’ve said so many times before and will continue to—the body does not attack itself. There are only two reasons someone will suffer from inflammation, neither of which is the body attacking itself. I brought this truth to light in Medical Medium and Life-Changing Foods. I go into even greater detail in Thyroid Healing. It’s critical that the faulty and damaging theory of autoimmune disease be rectified.

Below are some common types of inflammation.

Chronic fatigue syndrome (CFS), which has a number of other labels, including myalgic encephalomyelitis (ME), chronic fatigue immune dysfunction syndrome, and systemic exertion intolerance disease, is often the result of mild brain inflammation from an Epstein-Barr virus. Even very mild brain inflammation can trigger a severe case of this condition.

If you have CFS, a specialist may be able to tell you that you have brain inflammation, but he or she will not be able to tell you the true reason why. In truth, it’s the Epstein-Barr and shingles viruses (many of which are undiscovered non-rashing varieties), or a combination of Epstein-Barr, shingles, and HHV-6. There are dozens of mutated strains of these viruses that haven’t been discovered yet by medical research and science.

Liver inflammation is an issue I see with extreme frequency. Liver inflammation is often the result of pathogens wreaking havoc in this organ. An invader can cause a number of problems, including triggering elevated liver enzymes. If particular damage is seen on an MRI or CT scan, someone may be handed a hepatitis C diagnosis. Although medical communities know that hepatitis A, B, C, and D stem from viral issues, what they don’t know is which virus is creating these issues. The cause of hepatitis C is Epstein-Barr creating damage in the liver for an extended period of time. If you have any symptom or condition at all, it means you have a burdened liver. It’s vital to learn how to take care of your liver, so I encourage you to read Liver Rescue.

The medical profession has to rely on on inflammatory markers in the blood or MRIs and CT scans to classify a hepatic liver at different stages of inflammation. But inflammation isn’t the answer! The true answer is that Epstein-Barr virus, sometimes along with other herpetic viruses, are creating the inflamed liver. A doctor might also try to pin mystery liver inflammation (as well as fibromyalgia, rheumatoid arthritis and other health problems) on autoimmune issues. But as I said earlier, inflammation never stems from the body attacking itself because the body never attacks itself.

Eye inflammation can arise from a number of different bacteria. You can pick up a stye, staph or come down with the flu just from touching door handles in public places and rubbing your eyes. Glaucoma stems from a mutated variety of the Epstein-Barr virus that triggers eye problems. (Learn more about Epstein-Barr in the EBV bible, Thyroid Healing).

Gut inflammation and colon inflammation are caused by invaders that enter the gut, wreak havoc, and trigger inflammation. For example, if you suffer from small intestinal bacterial overgrowth (SIBO), you most likely have streptococcus in your system that’s creating inflammation and other gut issues. (Learn more about SIBO in Liver Rescue).

Other viruses and bacteria that can sit inside the colon and stir up major issues include mutated strains of shingles, Epstein-Barr, HHV-6 virus, cytomegalovirus, undiscovered HHV-10, HHV-11, HHV-12 or another of the many herpetic viruses in existence.

Conditions connected to colon inflammation can have a number of different instigators. If you suffer from colitis, a variety of the shingles virus is often the culprit. As I shared in Medical Medium, there are many varieties of undiscovered non-rashing shingles that cause a host of health problems. If you are suffering from irritable bowel, streptococcus may be to blame. Read Liver Rescue for more on this.

Inflammation can also occur if you catch a flu. If you’re only experiencing cold-like symptoms, you may think you have a rhinovirus, but these cold viruses no longer exist. I shared more on this topic in my radio show and article on Colds and Flus. The flu, which has taken over across the globe, now emerges all throughout the year. It can trigger inflammation in the sinuses, chest, lungs, and gut and may give rise to issues such as bronchitis, a serious cough, and severely weakened adrenals. Check out my posts on Zinc Shock Therapy, Vitamin C Shock Therapy, Top Foods for Colds & Flu, and 9 Top Herbs and Supplements for Colds and Flu.

The Effect of Food

Some health practitioners think certain foods, such as wheat, inflame certain individuals. This isn’t true. Gluten itself doesn’t inflame the body, but it does feed the invaders (pathogens) that are causing the inflammation.

For example, there’s a tremendous amount of misinformation surrounding celiac disease. Celiac isn’t hereditary. It’s an inflammatory illness where pathogens in the body are feverishly feeding on any gluten that’s consumed. Fueling these pathogens can lead to a host of negative reactions in the body, but the gluten isn’t directly responsible.

If you don’t have a pathogen in your system or only have an extremely dormant pathogen, then you’ll be able to eat all the gluten you desire without creating inflammation. Unproductive food choices may lead to other issues, such as the development of gallstones, which could lead to an internal injury if the gallstone gets stuck in the gallbladder duct. But any inflammation that arises from this issue would be injury-related, not pathogen-related.

The Role of Heavy Metals

There are a number of inflammatory tests, but I refer to these as “guess tests” because they can only reveal so much information, and they don’t highlight the underlying cause or provide you with answers on how to move forward:

The C-reactive protein test and the erythrocyte sedimentation rate (ESR or sed rate) test simply lets doctors know there’s inflammation. Doctors may use these tests to establish that you have inflammation and hand you a label, but the tests cannot reveal why inflammation is present or provide sufficient answers to help you heal.

The plasma viscosity (PV) test, IgA and IgG tests, and the antinuclear antibody test (ANA), may help reveal inflammation in your body, but again they won’t provide insight into the true cause. This is because the tests aren’t advanced enough yet and because the true causes of chronic illnesses are unknown to medical communities.

The liver enzyme blood work test and other similar tests, some of which are still being developed, also only identify inflammation.

As you eat more life-giving, anti-inflammatory fruits, leafy greens, and veggies, it’s helpful to eliminate the foods that create problems while you heal:

My hope is that this article and the other Medical Medium resources help bring you knowledge, hope and renewed faith in your body’s ability to move past the inflammation and its underlying cause. Trust your body, and know that I will never stop rooting for you along the way.