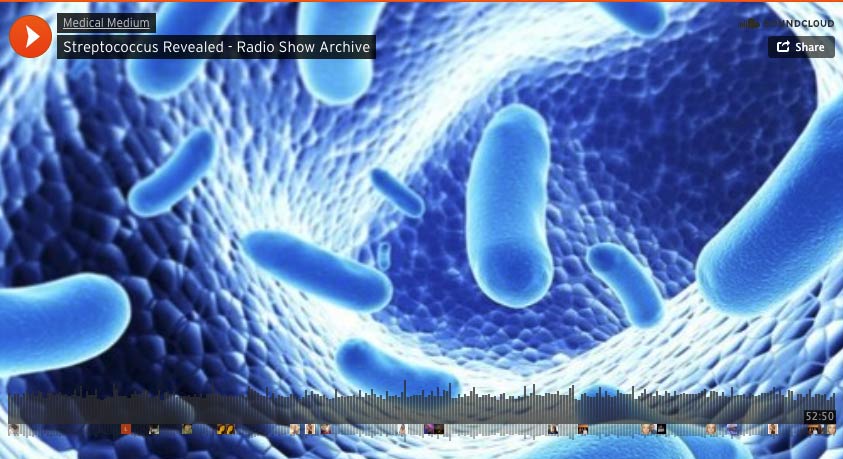 Streptococcus is a bacteria that grows stronger with each decade. It’s starting to become like a superbug in its strength and pervasiveness. There are hundreds of strep strains, some stronger than others, which can be passed between people and picked up in different environments.

The symptoms of strep are varied and numerous. They include sinus pain and congestion, otitis media, UTIs, intestinal disorders, SIBO, sore throats, styes, cystic acne, and more. Strep can cause a multitude of seemingly unrelated issues that all stem from one or more of the many strains. Headaches, fatigue, confusion, and low-grade fevers are some other side effects of strep in the body. The activity level of strep in the body ebbs and flows depending on the state of a person’s immune system and current life circumstances.

For most people, streptococcus first appears when they are young. It might be passed on from a mother, father, another child, or even a place, such as a public restroom. You might’ve been diagnosed with strep throat as a child, or experienced sore throats that were signs of often undiagnosed strep in the system. Strep in young children can also manifest as chronic ear infections and tonsilitis. While buzzing, ringing, popping in the ears or hearing loss are symptoms of Epstein-Barr virus, chronic ear infections typically indicate strep. It is also important to note that strep is a favored cofactor of Epstein-Barr.

For many people, strep has been with them for most of their lives, and as people age, it tends to grow stronger and wreak greater havoc in the body. In relationships, people share their bacteria, and it’s not uncommon for a person to pick up multiple strains of strep from different partners they are with. All of the strains are growing increasingly antibiotic resistant and if you think you have one or more strains of strep in your system, it’s very important you begin to implement the food and supplement protocol outlined below. Streptococcus is tricky to eliminate, but liberating yourself from this bacteria is possible.

Acne is often caused by streptococcus in the system. When it comes to acne, the strep resides in the lymphatic system. Some usual areas strep can be found include the cheeks, face, behind the ears, and around the neck. Someone who suffers from acne typically received multiple rounds of antibiotics as a child. It might take a bit of time for someone to fully heal from acne because any prior antibiotic use has ultimately played a role in strengthening the strep. Fortunately, by cleaning up the diet, adopting a proper supplementation protocol, and building up the immune system, you can free yourself from acne and the underlying strep. People who have battled with acne for fifteen, even twenty years, have been able to find freedom from it.

Cystitis is scar tissue on the bladder lining that stems from streptococcus being in the bladder for an extended period of time. Some people have had past UTIs signaling strep, while others never experience UTIs, but notice different problems that might indicate cystitis and the underlying strep strain. Once scar tissue forms on the bladder lining, inflammation and swelling might occur. This area can grow sensitive to certain foods you consume and the amount of uric acid in your system. A host of complications may arise that will only cease once the strep is destroyed. I’ve worked with women who have experienced such terrible cystitis they could no longer function and had lost their desire to live. But, these same women have found the real truth behind their cystitis and healed through adding in the correct foods and supplements, and trusting in the body’s inherent ability to heal.

SIBO stems from an overgrowth of strep in the gut. Doctors today might know you have a bacterial issue, but will not be able to tell you that SIBO indicates a system overrun with strep. Someone diagnosed with SIBO most likely has numerous other symptoms caused by strep. Similar to acne, SIBO can arise following the frequent use of antibiotics as a young child or in adulthood. Replacing the perpetual use of antibiotics, which are laced with virus and bacteria-feeding eggs and petroleum, with healing foods and supplements will actually serve to permanently destroy the strep strain. Antibiotics can be necessary and valuable in certain cases, for example a UTI that is severe and out of control. However, many times, antibiotics are overused or used for inappropriate reasons.

Strep can invade the colon and cause irritable bowel syndrome or trigger other intestinal conditions. Although colitis is a variety of the shingles virus, it can worsen when high levels of strep in the body cause inflammation. The aggravation of any chronic condition is compounded by the presence of strep in the system.

Many styes people develop are strep related. Some styes stem from viral issues, but not all styes are the same, and many correspond with strep in the body.

In 90% of cases involving pelvic inflammation, strep is the culprit. Another common condition, bacterial vaginosis, is connected to strep as well.

Any strep symptoms will most likely worsen during or around a woman’s menstrual cycle when her reproductive system needs additional energy or during ovulation when hormones are shifting. It’s not menstruation or the hormones themselves that cause the worsening of symptoms, but that underlying health issues like strep can take a stronger hold during this time. A severe UTI, an increase in acne, additional sinus issues, a flair up of endometriosis symptoms—all of these issues tend to grow worse during these particular time periods.

Parents are rarely given the information they need on how best to support their childrens’ health, primarily because there is so much misinformation competing for our attention today. Besides practicing the information found in my books, radio shows, and online content, finding a practitioner who supports what you are discovering here and can help you to navigate your child’s health issues is invaluable.

For children, it is critical to build up their immune systems with healing foods and appropriate amounts of supplements such as zinc sulfate, B-12 with adenosylcobalamin, vitamin C, and elderberry syrup. If you notice any strep symptoms, adding a little goldenseal to the child’s protocol can be highly beneficial. It’s important to stay on top of any signs of strep a child exhibits so proper supplementation can help support the child’s health and antibiotics may not have to be used as frequently.

Eggs feed strep and should be avoided while you heal. Some people are wrongfully told to consume eggs when healing from SIBO, but this is damaging misinformation. Unfortunately, eggs will continue to feed the bacteria in your body. Someone suffering from cystitis might not feel any irritation when consuming eggs, but they are still feeding the problem and creating further problems for their health. From PCOS, to breast cancer, calcifications, nodules, tumors on the thyroid, and more, eggs can exacerbate many issues, and it is best to avoid them. You can read more about eggs in my book Life-Changing Foods.

Like eggs, dairy products feed strep as well. Avoid milk, cheese, butter, or ghee if you are battling any strain of strep. Try to stay away from corn, wheat, barley, rye, and canola oil. Do not be concerned about barley grass juice, this is different to the barley grain and doesn't contain gluten. It's an anti-strep food and exceptional to include for your health. When the grass is juiced, the change in structure contains a phytochemical that wards off strep.

As you begin to clean out the strep in your system, building up the immune system is a critical piece. Your SIBO, cystitis and all the other symptoms related to strep can permanently go away, but this healing can only begin once you add in the correct foods and supplements. When you’re fighting strep, adopting a plant-based diet for a period of time can be very beneficial. You might want to consider trying the 28-day cleanse laid out in my first book, Medical Medium.

The antibacterial and antiviral properties found in bananas are incredible for collecting strep and pulling it out of the system. Bananas are especially good for someone with SIBO. Berries are great for defeating strep anywhere in the body system. Spinach, especially for acne sufferers, is a wonderful addition to one’s diet. Onion helps fight strep in the bladder, reproductive system, intestinal tract, colon, and can also help in healing styes. Juicing turmeric with cucumber or celery creates a very healing drink. Celery juice is another powerful drink that instantly starts eradicating strep. Cayenne pepper can be great, but be careful not to overdo it if you’re sensitive. Raw honey contains phytochemicals that destroy all the different strep bacterias. Arugula, ginger, garlic, winter squash, sweet potatoes, kale, and the meat and water of coconuts are all supportive foods to incorporate. Including fresh oregano and other herbs like thyme, rosemary, and sage is very healing as well. You can read about the powerful healing benefits of all of these foods in my book Life-Changing Foods.

A sizable dose of vitamin C is a powerful weapon against streptococcus. Zinc sulfate is a critical strep-fighting supplement. One reason strep has become so rampant is because most people suffer from a zinc deficiency, and it is therefore critical to replenish your body with this vital mineral. Oregano oil capsules are great for fighting strep, especially SIBO and acne symptoms. Cat’s claw, lemon balm, goldenseal, and monolaurin from coconut are four other very helpful supplements.

If doctors tell patients cystic acne is just hormonal pimples, then people will remain sick and grossly misinformed. If people continue to believe the faulty idea that sinus infections are attributable to pollen in the air, people will remain unwell. If people just assume vaginal discharge is yeast, and are not correctly informed that it’s a strain of strep, people will continue to suffer. Together we must clear up the misinformation and spread the truths that will bring genuine healing.

Healing foods and supplements can overcome even the most powerful strains of strep in today’s world and with time, patience, and determination, you can defeat strep and experience the freedom of vibrant health. Be gentle with yourself, seek support, reach out to angels for help, and watch as your life begins to transform!

(Note: Some visitors may search for the spelling "catsclaw" or "cats claw" when searching for "Cat's Claw". These are local or regional variations on this beneficial herb.)