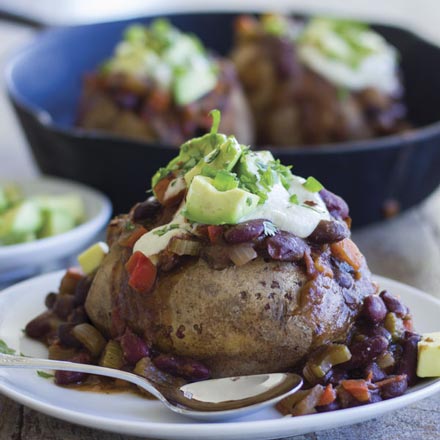 Was there ever a time, maybe in your childhood, when you got in trouble for someone else’s mischief—when you were judged as guilty by association? Then you understand the plight of the potato. Potatoes have gotten a bad rap for far too long. As victims of the war on foods mistakenly categorized as “disease-producing,” potatoes have been blamed for ills they never caused. Potatoes are wrongly accused of contributing to obesity, diabetes, cancer, Candida overgrowth, and many other conditions, while in truth these miraculous tubers can reverse these illnesses. That’s right! Potatoes are actually good for people with diabetes, because they help stabilize blood sugar.

One common misconception is that potatoes are poisonous because they’re nightshades. Potatoes, tomatoes, eggplants, and other edible nightshades do not aggravate conditions such as arthritis; you can put aside the worry that potatoes are inflammatory. (For more on this, see the chapter “Harmful Health Fads and Trends.”) Truth is, the toxic oil that potatoes are fried in, the cheese sauce ladled on top, and the butter, milk, and cream mashed in are what have the world convinced that potatoes are bad for us. The frying process and the highfat/high-sugar content of dairy products are the real instigators of insulin resistance and A1C levels that reach the diabetic zone. This combination of fat plus lactose also feeds every type of cancer. Potatoes don’t cause health issues; the other ingredients served with them do. We should also be careful not to lump potatoes in with the fear of grains and processed foods.

If you’re avoiding “white” foods such as white rice, white flour, white sugar, and dairy products (such as milk, cheese, yogurt, and cream), don’t cut out potatoes! After all, a potato in its whole, natural state isn’t white—it’s covered in nutrient-rich red, brown, gold, blue, or purple skin. This skin of the potato is one of the best nutrition sources on the planet—it’s a miracle of amino acids, proteins, and phytochemicals. Only once you cut into a potato might you see a white interior—which doesn’t mean it’s lacking in value. After all, we don’t think of apples, onions, or radishes as white and therefore useless, even though when you cut into them, they’re devoid of color. And a cultivated blueberry is colorless inside (whereas wild blueberries are saturated with color inside and out); this doesn’t mean it shows up on white food lists. Instead, we picture these foods in their whole forms, which is exactly how we need to start thinking of potatoes.

The entire potato, inside and out, is valuable and beneficial for your health: potato plants draw some of the highest concentration of macro and trace minerals from the earth. Potatoes are also high in potassium and rich in vitamin B6, as well as a fantastic source of amino acids, especially lysine in its bioactive form. Lysine is a powerful weapon against cancers, liver disease, inflammation, and the viruses such as Epstein-Barr and shingles that are behind rheumatoid arthritis, joint pain, autoimmune disease, and more. Potatoes will be your allies if you’re looking to fight any chronic illness—to fend off liver disease, strengthen your kidneys, soothe your nerves and digestive tract, and reverse Crohn’s, colitis, IBS, or peptic ulcers.

In addition to being antiviral, they’re antifungal and antibacterial, with nutritional cofactors and coenzymes plus bioactive compounds to keep you healthy and assist you with stress. Further, potatoes are brain food that helps keep you grounded and centered. As a kid, did you ever do that science project where you stick some toothpicks in a potato, balance it in a cup of water, and watch it sprout on the windowsill? How many other foods can transform and thrive like that, coming to life before your eyes? That’s the power of a potato—a power that’s not to be underestimated—and we witness it firsthand as children. How does it happen that when we’re adults, we’re taught that it’s a weak, empty, ridiculous food, as though we’re supposed to forget the miracle we witnessed way back when? What we should really be saying about potatoes is, “Where would we be without you?” They are that vital to our existence.

Maybe you’ve steered clear of the potato misinformation all these years. If that’s the case, your body thanks you for it—and now you have even more reason to appreciate potatoes. On the other hand, if you’ve been led to believe that potatoes are nothing but starch that will add to your waistline, it’s time to see this root vegetable in a whole new light. If you’re bold enough to overcome the conditioning of popular food culture to appreciate the potato in its unadulterated form, you will give yourself one of the greatest gifts on this earth.

If you have any of the following conditions, try bringing potatoes into your life:

If you have any of the following symptoms, try bringing potatoes into your life:

Potatoes offer us foundation and strength when we’re feeling blurred, dizzy, foggy, troubled, or adrift in our lives. If your ego is consuming you, potatoes can tap into the humble confidence within, overriding the toxic emotions that keep you from succeeding in the areas of life that truly matter. Potatoes reorient us, help us to feel pleased and gratified by our experiences, and guide us to make choices not based on ego but out of true grounding and stability.

Have you ever felt like you had so much to offer, only you remained unseen by those around you? The potato is the ultimate underdog—full of potential, yet perpetually overlooked and trampled on (sometimes literally). Potatoes remind us of all our hidden gifts, our life purposes and talents that get trapped inside, held back, stifled by the earthly traffic known as everyday life. Potatoes’ humble strength is due in part to how they grow: in clusters, surrounded by other potatoes, like a large extended family. If you come from a small family or had a difficult upbringing, potatoes will energetically pass along the grounding and sense of belonging that comes from being raised with a wide familial support network. If you come from a large, adoring family, potatoes will help you continue your connections. Potatoes come in numbers for a reason: so that, like an army of loved ones, they can fight for you.

When you feel like you’re living by an arbitrary belief system that dictates what you’re supposed to do and who you’re supposed to be, connect with the wisdom of the potato. Remind yourself that so much of who you are is beneath the surface, that you are supported and witnessed, and that you deserve to unearth your true nature and share it with the world.

* Potatoes are one instance where it’s definitely best to seek out organic if possible.

* When preparing potatoes to eat, the best way to maximize the healing benefits and keep the nutrients intact is to steam them. If you normally eat your potatoes with butter, cheese, sour cream, or the like, try avocado as a dairy replacement, either cubed or mashed on top. Salsa and tahini are other tasty additions.

* After you’ve steamed a batch of potatoes, set some aside to cool. Later, pull them out of the fridge, slice or cube them, and add them to a spinach or kale salad. The enzymes from the potatoes will enhance the healing alkaloids in the leafy greens, maximizing the medicinal power of the meal.

* If you’re dealing with a cold sore, try putting a slice of raw potato on it for relief.

* Potatoes can absorb and help diminish the negative effects of wireless Internet signals, cell phone signals and emissions, and other electromagnetic fields (EMF). They can even soak up and neutralize the negative emotional energy we sometimes pick up during the day and bring home with us. To tap into this feature of potatoes, select one to keep out in a bowl on the kitchen counter or elsewhere in your home. Discard the potato every five to seven days (don’t eat it) and replace it with a fresh one.

* Whenever you’re celebrating, make potatoes part of the meal. Whether it’s a wedding, engagement, birthday, graduation, promotion, holiday, or other festive occasion, including potatoes will support and enhance the joyful emotions and help sustain them for days afterward.

This chili is the perfect hearty, warming meal for colder months, though it’s great eaten any time of year. While it requires some chopping and a little time, the end result is a nice big batch of chili that will feed a hungry crowd or keep well for meals all week long. Feel free to add more red pepper for some extra spice.

Preheat the oven to 425°F. Pierce the potatoes in several places with a fork. Bake for 45 to 60 minutes, until tender. Drain the beans, place in a 4-quart pot, and cover with an inch of water. Bring to a full boil, then reduce heat to a simmer. Cook the beans for 1 hour, or until tender, adding more water as needed to keep the beans covered with liquid. Drain and set aside.

For the chili, heat 1 tablespoon coconut oil in a large pot; add the onions and garlic. SauteÅL over high heat until the onions are translucent and fragrant, adding water as needed to prevent sticking. Add the carrots, celery, mushrooms, bell pepper, spices, sea salt, and red pepper flakes, if using. Continue to cook, stirring occasionally, until vegetables begin to soften, about 15 minutes. Add beans, tomato paste, and tomatoes, stirring until well combined. Cover and continue to simmer on medium heat for 15 minutes. Reduce heat to low.

* You may use 6 cups of salt-free canned beans, if desired.