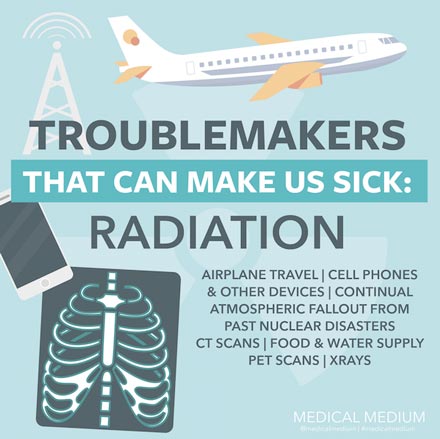 Troublemakers That Make Us Sick - Radiation

In Medical Medium Cleanse to Heal, I share with you the troublemakers–pathogens and toxins–that are behind the epidemic of chronic illness and symptoms we are experiencing on this planet today. Today I am sharing with you some insights into one of these sneaky troublemakers that can make us sick: radiation. Below you will read some excerpts from Cleanse to Heal on radiation, which is one troublemaker that is often ignored or denied because it can't be seen. It's vital to know what we are up against on this planet and what the true causes of symptoms and conditions are and how to address them so you can heal. This all comes down to first having the truth in your hands, which is what Cleanse To Heal offers you.

"No one wants to age quickly—to get gray hair faster or wrinkled skin or degenerative bone diseases. No one wants to shrink and lose their height. No one wants their fingernails and toenails to lose their vitality and color. No one wants their teeth to discolor and decay or their eyes to glaze over with cataracts or degenerative retina disease to develop. We simply don’t want to age; we’re always talking about anti-aging and never talking about the radiation exposure that contributes to it. Radiation speeds up the aging process rapidly. It causes much faster deterioration of cell tissue; vitality gets sucked out of every cell exposed to radiation. While the body’s cells are always renewing, radiation doesn’t just disappear. We need to work on actively ridding it with the 3:6:9 Cleanse and the Heavy Metal Detox. (The Heavy Metal Detox addresses radiation at the same time as toxic heavy metals.) Otherwise, radiation within us has a shelf life that outlasts our body. When we’re in our grave, hundreds and hundreds of years after we’ve died, we’re still radiating.

Radiation also lowers the immune system. It’s critical to keep our immune system strong so we can fight the pathogens and battle the toxins that we come up against every day. When we fly, we already get a tremendous amount of radiation exposure. There’s still nuclear fallout floating in the sky, for one, from tragedies such as Fukushima, Hiroshima, and Chernobyl, and there’s more of it up high. For another, everybody on the plane has just been through scanners and placed their scanned luggage in the overhead bins, concentrating all that radiation directly over our heads, which gives us extra radiation exposure. With all of this—on top of the radiation exposure we get from sources other than flying, such as X-rays, CT scans, MRIs, devices such as cell phones, and even food and water—if we can take a step to protect our health, well-being, and vitality, it’s worth taking."

You might be surprised to hear that MRIs are a source of radiation exposure. The industry doesn’t tell us that there is a specific form of radiation that comes from MRI’s that’s different from the radiation emitted by X-rays and CT scans. Also, MRIs are often performed in the same medical center or area of a medical establishment where X-rays and CT scans are performed. This means you can inadvertently get some additional radiation exposure when you go for your MRI just by being in the same area where these services are offered. You can be sitting in the waiting room or lounge at your medical center and be exposed to dozens of people who are carrying radiation from having X-rays or CT scans in that same center. In addition, many people who get MRIs have already received X-rays or CT scans very recently, which means you can be exposed to the radiation they are carrying in them into the medical center. Again, we can’t avoid all exposure to radiation, which is why knowing how to remove it from your body with the information in Cleanse To Heal is so empowering.

"Here’s an unknown source of radiation: luggage that’s been through airport security. When your bags go through the scanners that allow agents to analyze their contents, the bags collect radiation that stays on them for years—centuries, even. The next time your knapsack or tote or briefcase goes through the scanner, it collects more radiation, and that accrues and accrues and accrues with every trip. Airport security is using more radiation than ever before right now. Every year, it increases. As a result, we should be discarding our carry-on bags every three trips. The checked bag scanning process tends to emit less radiation, so you can discard checked bags less often, more like every six trips. (And those are one-way trips, by the way. Round trips count as two trips.)

Now, I know this isn’t welcome information. I know it sounds drastic and jarring, especially with the popularity of expensive luggage and in this age of reuse. Can I afford to buy a new bag every few trips? Isn’t it wasteful? you may be asking yourself, and rightfully so. The bigger question is, can you afford not to? Especially if you have babies or children who spend any time near your luggage that’s been on multiple flights, can you afford to expose them? (More on protecting little ones in a moment.)

We also need to think about where we’re storing our luggage between trips, especially if we have little ones. When there are children in the house or we’re chronically ill, we need to be most mindful about not keeping well-traveled bags nearby. What if you’re using your child’s bedroom closet to store the family carry-ons that have been on five, six, or seven trips? What if you sleep four feet away from the backpack you’ve taken on 10 flights and it’s radiating there, right next to you, every night? These are questions to consider. If you have kids, do whatever you can to change luggage regularly. Be particularly careful about letting babies near bags that have been on a flight with you. If you don’t have children in the home and you can’t afford new bags, stow them as far from where you spend time in the home as possible.

What about the items that were in the luggage when it went through airport security? It’s really the largest item that collects the most radiation, and that item is the piece of baggage itself. Computers, phones, and clothing are smaller, and we store them separately and spread out when we’re not flying. That is, we don’t usually keep an exact set of shirts, pants, and sweaters from a trip shut together in one drawer, where all the radiation it picked up will be concentrated. These smaller items tend to be replaced more often than luggage too; we cycle through them, so this doesn’t need to be a big source of worry. Same with snacks you might have packed in your carry-on to eat while traveling. When we eat food that’s been through the scanner, yes, we’ll get a small dose of radiation. Food sold at the airport has been scanned too, though. You may need to eat while traveling, and you especially need to drink liquids, so go ahead and pack your snacks, drink your water, and plan to take care of yourself with cleansing steps such as the Heavy Metal Detox Smoothie afterward.

This is what I mean about living our lives. Some exposures we can’t avoid. Some, like luggage, we can limit. Either way, it helps to be aware. Then we can make smart choices, such as choosing a more economical bag next time you purchase luggage so you won’t mind letting it go before long, and sparing your kids from sleeping next to radiating carry-ons. If you’re concerned about the waste aspect of discarding your travel bags over time, think about the waste aspect of becoming ill and hospitalized—and the costs that occur on all levels of life when that happens.

Now, it’s possible that someday, radiation at airport security will get more attention. If it does, be prepared to hear experts say that the radiation levels that luggage picks up, if detectable, are safe for the body. That won’t mean the radiation really is safe—it’s like telling us mercury fillings are safe. Sometimes tools and knowledge are behind the times. Hold on to what you’ve discovered about the truth here."

In Medical Medium Cleanse to Heal, I give you advanced information about what’s going on inside the body that causes symptoms and conditions to develop, as well as giving you a blueprint for cleansing and healing. You will discover how to cleanse your body of the pathogens and toxins responsible for illness (including radiation), strengthen your immune system and other body systems, provide your body with the hydration and nutrients it needs, heal emotionally and spiritually, and much more so you can experience all the benefits proper cleansing has to offer. Medical Medium Cleanse to Heal was written to stand alongside you as a compassionate friend and guide as you make the choices that are best for you and your family's health.